The Best in the World to Buttboard Mount Panorama 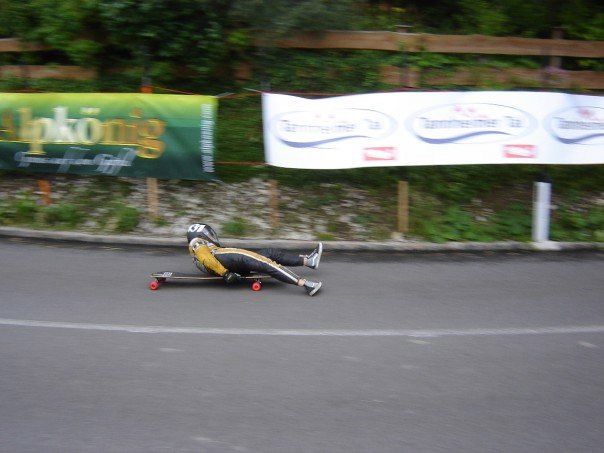 With competitor registrations to Newton’s Playground still coming in, it would seem that the inaugural gravity fuelled festival to be staged on Mount Panorama in under three weeks time has caught the attention of the gravity sporting elite from around the world.

2007 Buttboarding World Champion, Austrian Michael Serek has booked his flight to Bathurst from Vienna in a bid to poll vital world championship points at the opening World Cup event for the 2008 season, Newton’s Playground. Serek, who finished 62 points clear of his nearest rival, Sebastian Tournissac in 2007, has been missing from the Classic Luge leaderboard for several years however is looking to keep his top rank for a second year running in 2008.

Serek is bringing with him fellow Buttboarder and Austrian, Georg Klotzberg who has been steadily improving his world ranking from 18th in 2005 to 9th in 2006 and finishing 6th in 2007. Other 2007 top ten finishers to be making the trip down under for Newton’s Playground is American Chris McBride (8th) and Englishman William Stephenson (10th).

The international riders certainly won’t have it all their own way on Mount Panorama as they will be pitted against fifteen Aussie riders coming from Victoria, Queensland, South Australia and New South Wales all hell bent on posting a good result in the first World Cup sanctioned gravity sport event to be held on the continent.

“It’s going to be history in the making for everyone in our sport here in Australia”, said local New South Welshmen and buttboarder Joseph Eagle. “There is so many in the industry fully pumped to be competing on a world stage on one of the smoothest and most challenging road surfaces in the country. I’m sure it will motivate many of us to join the international circuit so we can compete at other World Cup events”, Joseph continued.

Classic lugeing or Buttboarding in its simplest terms is old school street luging - the purist's choice, however it has some major differences.

A buttboard is made from a simple concave wooden deck, with standard skateboard trucks and wheels and does not have the usual handles and footpegs of a streetluge that restrict your body position. When riding a buttboard there is very little to hold onto save for the board itself, however Buttboards are allowed a simple plastic strip screwed under the side rails of the deck (like on oldskool skate decks) to assist with holding on during turns. This means that buttboarders have evolved their own extreme riding style, using their entire body to carve the board through the turns, often sliding the board round corners in a four-wheel-drift which can result in riders becoming tangled and colliding with each other.

Newton’s Playground will also feature a very strong international competitor contingent in the premiere on track sports, the Skillset World Cup Street Luge and the Excelarate World Cup Speedboard. Riders are registered from South Africa, Great Britain, America, Canada, France, Germany, Switzerland, Malaysia and Hawaii. Furthermore competitors from every state in Australia will be there to fly the flag on home soil.

A huge all Australian live music lineup will feature across the course of two days featuring headline act Grinspoon along with Gyroscope, Urthboy, Kid Kenobi, the Funky Punks, Tonk and heaps more.

Tickets are now on-sale for Newton’s Playground exclusively through Moshtix. Interested spectators can purchase online (www.moshtix.com.au), by phone (1300 GET TIX (438 849)) or through any Moshtix outlet.

All event & ticketing information can be found online at: www.newtonsplayground.com

Spectators are encouraged to book early as there is a strictly limited capacity.