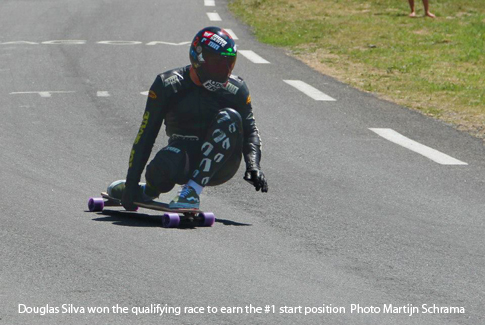 Peyragudes, France - Douglas Silva earned the number one starting position for tomorrow's Peyragudes Never Dies Downhill Skateboarding Main Event.  The qualifying race final featured the top two finishers of both the Odd and Even Qualifying Race brackets.  Patrick Switzer finished second so he will start from the #2 position.  Thiago Gomes-Lessa finished third earning him the #3 starting position and James Kelly was fourth placing him in the #4 spot.

The Peyragudes course is both technical and very fast with speeds exceeding 100 km/h (62 mph).  In today's racing heats there were numerous crashes with a few riders sustaining injuries that will keep them out of tomorrow's final.