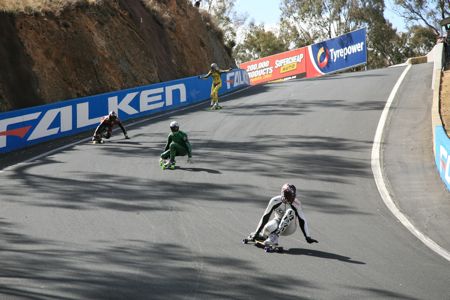 Last weekends Newton's Playground / IGSA World Championships set a new standard for a World Championship event.  The Mount Panorama course was the most intense ever selected for a World Championship and the Australian Skateboard Racing Association (ASRA) set new technological standards by bringing both organizing live feed, top to bottom video and live online timing and scoring.  They also brought Coastlongboarding.com's Bricin Lyons to the land down under to give expert play by play announcing.  Thanks to their efforts, thousands of downhill skateboarding enthusiests around the world were able to follow the action.  ASRA feels the best way for our sport to grow is by sharing it with as many people as possible.  They have uploaded all of the videos on vimeo.com for everyone to enjoy.  We have organized all of the Open Downhill Skateboarding videos in order so you can easily follow the competition from beginning to end culminating in the big win by new IGSA World Champion Kevin Reimer.  Enjoy!

This Video will be available soon!


Special Thanks to everyone at ASRA for all their hard work creating the videos!!!