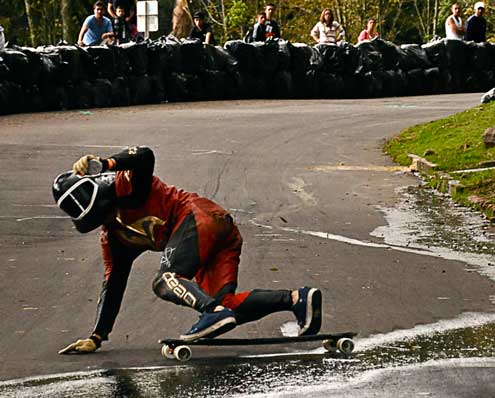 Bogotá, Colombia - Round #2 of the 2011 IGSA Sudamericano Circuito de Downhill got underway in the beautiful city of Bogotá, Colombia. Today on a very technical course in the middle of a national park we had qualifying.  The weather in Bogotá hás been unpredictable the last few days and today was no different.

After the sun rising early in the morning the warm-up took place but in the afternoon the schedule was accelarated due the bad weather forecast.

In the first qualifying run we had Canadian Kyle Martin taking the pole position setting a time of 1:05.25 followed closely by also Canadian Dillon Stephens finishing with 1:05.40. Patrick Switzer completed the Canadian domination with 1:05.50. Fourth place went to Brazilian Juliano Cassemiro with a great 1:06.10 with Douglas Silva close behind with 1:06.20. Canadiam Travis Craig rounded out the top five with a 1:07.65.

Last years Festival vice-champion Felipe Malaga set 1:07.70, same time as best Colombian Camilo Cespedes. Since Felipe had the better second run, he kept 7th place in qualifying followed by Camilo in 8th. Rain came pouring down during the second run making it nearly impossible to improve so most times were set as during the first qualifying run.

In Street Luge we had Brazilian Walter Ribeiro setting the best time with 1:09.30 followed by fellow Brazilian Leo Borton with 1:11.40. Three Colombians rounded out the top five. Felipe Buitrago was third with 1:16.45, Javier Pulido took fourth with 1:17.10 and Andres Arians fifth with 1:22.50. One of the most surprising riders was nine year old Brazilian Marcos da Costa Filho taking 6th place with a time of 1:25.35.

In Womens Downhill Skateboarding, Canadian Katie Nielson was first with an incredible 1:10.20. Nielson was more than 20 seconds ahead of 2nd place Colombian Jenny Patiño with 1:31.40. In third was Brazilian Reine Oliveira setting a 1:52.40 and rounding out the top four was Colombian Catalina Fonseca with 2:16.00.

Junior II Downhill Skateboarding first place was for Canadian Falke Nehren with a great 1:14.80 followed closely by Colombian David Ramos with 1:15.55. Columbians Juan Garzon with 1:21.85 and Nicolas Moreno with 1:24.20, completed the top four.

Tomorrow we are expecting to run the Final heat races of all the Downhill disciplines.  In addition a Downhill Slide competition Will be held. Sliding is very popular in countries such as Colombia, Venezuela and Brasil.