Akron, Ohio, USA- On September 22-23, 2012 the IGSA NorAm Downhill Series will make a stop in Akron, Ohio for the first ever Rubber City Gravity Games. Akron was once the home of the four major U.S. tire manufacturers Goodrich, Goodyear, Firestone and General Tire earning it the moniker “Rubber City.”

The event will take place in and around the grounds of the famous Akron Soap Box Derby Hill where a 1.1km (.7mi) road course has been laid out utilizing city streets and access roads. Top speeds are expected to be in the 80-90km/h (50-55mph) range. 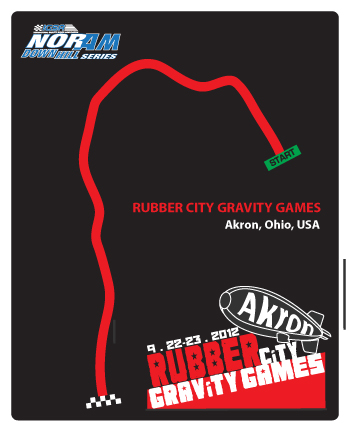 A huge start ramp will be erected at the top of the course to bring riders quickly up to speed. The riders will initially drop onto a main road and then make a hard left hand turn into the rear entrance of the soapbox derby complex. From there the racers will make a quick right followed by a long sweeping left that will drop them into the derby complex. Once in the complex there will be a short chute followed by a chicane and then a straightaway to the finish line. The turns in the course are described as extremely tight and challenging.
The Rubber City Gravity Games will be round number six of the 2012 IGSA NorAm Downhill Series. Additional NorAm events will take place in Venon, Canada - Windham, New York - Goldendale, Washington - Monterrey, Mexico, - Calgary, Canada – San Dimas, California. Each rider’s five best finishes will count toward their final ranking. Classes offered will include Open Downhill Skateboarding, Women’s Downhill Skateboarding, Junior I Downhill Skateboarding (8-13 years), Junior II downhill Skateboarding (14-17 years), Street Luge and Classic Luge. 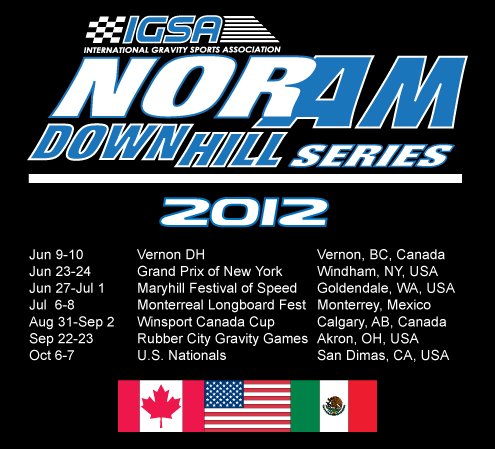 In addition to the downhill events, the organizers are making plans to host a National level slalom skateboarding race on the Derby Hill concurrently with the NorAm race making the event a true Gravity Sports weekend in Akron! This race will be the lone IGSA sanctioned racing event during the eight-event 2012 Akron Gravity Sports Series. Other events in the series include two "Learn to Luge/ Skate" days and 5 open track days were riders will be able to, for the first time ever, ride on the world famous Akron Soap Box Derby Hill.