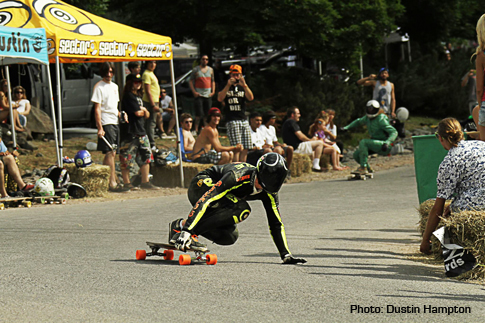 The event got underway on Saturday morning.  Practice proved that video can be deceiving with the 1 km (.6mi)  course was more technical than it looked. Windham Police officers clocked the top lugers at 85 kmh (53 mph) and top skateboarders at 76 km/h (47 mph).  At the end of the day, Switzer was the top Downhill Skateboarding qualifier and David Dean was the on top for Street Luge.

Organizer Marc Dean asked the IGSA for special permission allowing Classic Luge riders to use wheels larger than 70mm in diameter. He offered a cheap entry fee and a round robin race format to encourage downhill skateboarders to use their regular downhill boards in the Classic Luge division. The modified rules were a huge success with Open Downhill skateboarders like James Kelly, Kyle Wester, Switzer andDubrieul joining the lugers for some fun.  At the end of the day, everyone had huge grins on their faces.  British transplant Nick Kinish won Classic Luge,  Bob Lavoie was second with Switzer the skater, coming in third!

The IGSA is making plans to split the downhill skateboarding division into three seperate categories (Novice, Sport, Pro) in 2013 so with that in mind, organizer Marc Dean aksed and received permission to run seperate Pro and Amateur Downhill Skateboarding races in Windham.  Racing started off slowly on Sunday with everyone recovering from Saturday nights slide jam and subsequent party in the brew pub.  The Am's were up first but after two hours of injury time delays, their race was suspended to let the Pro's.

The first round of Pro Downhill Skateboarding had the usual first round of lopsided heats featuring top riders going against those who should have raced in the Amatuer class.  After eliminating the weak and getting down to the bracket of 32, racing got tight.  The final left hander turned out to where all the action took place with many racers going grazing for hay.  Jenica Davenport and Solomon Lang were in the final corner calling the race while the windam locals were grinning ear to ear as the were seeing our sport for the first time.  Switzer took the final corner too hot in the Semi's and was bumbed to the Consolation Final.  In a final that will be remembered, Alex Tounge took the win and $1,500!  James Kelly finished in second place followed by Ben Dubrevil in third and Charles Ouimet in fourth.  Patrick Switzer won the Consi Final to earn fifth place.

David Dean was the winner in Street Luge. The former World Champion drove out, slept in his truck and took the win.  It was the second win of the season for the semi retired racer who also won the World Cup race in Bathurst, Australia earlier this year.  East Coaster Justin Crewnshaw, who has a monster start, took second  Christin Conoaway took a controversial third place over Louis 'Bob' Bouchard.

Thanks to Race Director Neil Orta, the race got back on time and the Amateur Downhill Skateboarders were brought back out for their third and fourth round heats.  Nathan Ryan earned the win with Alexis Labrecque finishing second and Avery WIlcox in third.

Triastian Bell was the winner in the Junior I Downhill Skateboarding division for skaters between 8 and 13 years old. Julian Rodriguez finished in second and Greg Paproski was third.

Check out this Photo Gallery by Blair Caldwell

We are still awaiting the complete results from the organizers.  We'll post them as soon as they become available...