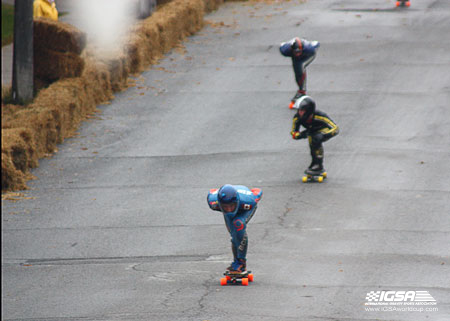 Switzer leads Mackenzie and Garant Rousseau in the Finals.  Photo Liz Kinnish
Picton, ON, Canada - Patrick Switzer scored a dominating victory in todays Downhill skateboarding Final at the Prince Edward County Gravity Fest / IGSA Canadian National Championships.  He beat George Mackenzie and Maxime Garant Rousseau to the line on a wet, soggy day.  Number eight qualifier Garant Rousseau and number nine qualifier Mackenzie scored a number of key upsets in the rounds leading up to the finals.  First the pair eliminated number one qualifier Niko Desmarais in the Quarter Finals.  Then the duo eliminated number four qualifier Mischo Erban in the Semi-Finals to earn their berths in the Final. 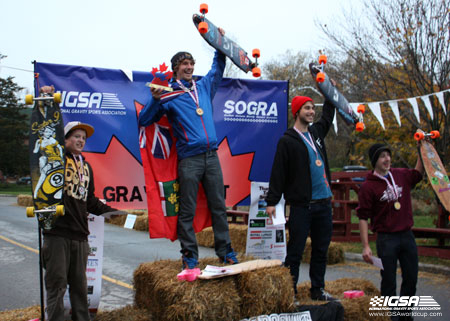 Patrick Switzer stands atop the Downhill Skateboarding Podium.  Photo Liz Kinnish
Switzer seemed to be saving his best efforts for the later rounds.  He deliberately rode slowly in the early rounds to not show what he was capable of.  In the Semi-finals he seemed to uncork his best stuff leaving his rivals far behind.  In the finals he never really seemed to be pushed either.  He simply put the hammer down and rode away from his rivals to earn the Canadian National Champion title. 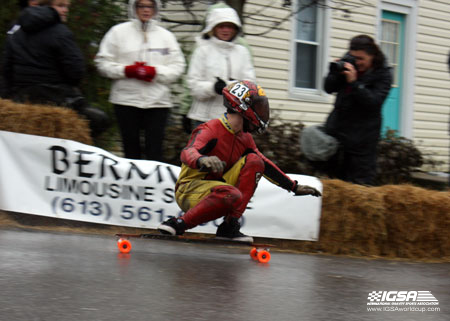 Luke Melo also had an outstanding weekend.  After winning the Jr II Downhill skateboarding title earlier in the afternoon, Luke rode a solid race to earn a place in the finals.  In the race he simply overcooked it entering the right hand "Crash Corner" hitting the bales on the exit.  At that point all his hopes of finishing on the podium were done.

Louis Ricard was the winner of the Consolation Final earning him fifth place.  Pascal Jean, John Barnet and Mischo Erban finished in that order behind him for sixth, seventh and eighth place respectively.