Photo: Sharon Le Grange
This past weekend saw the first race of 2011, High Rising Downhill Xtreme. High Rising has built a name for it's quick speed and technical last corner, which has the infamous High Rising Dip in it. Days running up to the event competitors were psyching each other out with past event talk of carnage corner.
The hype definitely played off on Saturday's practice runs with everyone taking it very easy in the beginning. A moderate tailwind was not helping the situation but after a couple of runs most of the competitors were getting accustomed to High Risings quick speed and hard foot braking into carnage corner.

Photo: Sharon Le Grange
As the afternoon rolled in qualifies began, Russell Naude clocked the quickest time in both street luge and classic luge to take the number 1 spot in qualifies. Alex Duss took the number one spot in the open skateboard division and Nick Hook clocked the quickest time down the hill to put him in first spot in the junior skateboard division.

Sunday riders were greeted with a strong SE tailwind. Riders had to adjust to the new conditions, a strong tailwind into carnage corner is a recipe for crashing. On almost every run riders were going down, our efficient medics, Tygerberg Volunteers, were on the ball from the first crash. The marshals on carnage corner had their work cut out for them as well, repacking bails and sweeping the course is a tough job they did very well.

One of the highlights was definitely the junior division, the groms were over flowing with stoke after each run, with smiles all round. As the afternoon fast approached it was time for racing. The riders took every opportunity to get in as many runs as possible before racing began. First up was streetluge, Russell Naude put the heat down flying into the last straight before carnage corner clocking 100km/h and holding his line to take the street luge division, following closely behind was Glen Phillips in 2nd, Brain Isham 3rd and Duayne Cumpsty 4th. 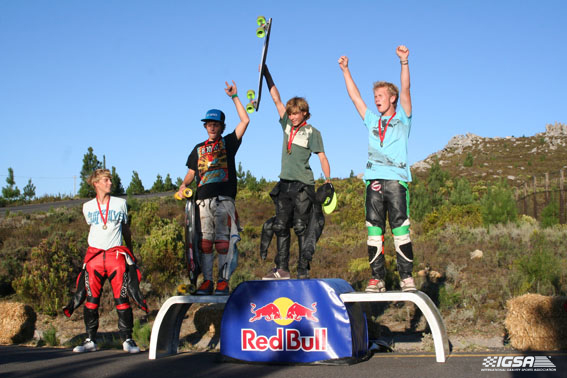 Photo: Sharon Le Grange
In the junior skateboard division the groms had been skating hard all weekend, in the finals Sam Jakins stuck his line through carnage corner to hold off the rest of the pack to take his first win. Followed in 2nd was Nick Hook, 3rd Adam Lincoln-Lewis and Justin Brown in 4th.

Photo: Sharon Le Grange
Up next was the much anticipated open skateboard division, there was a lot of action and crashing giving the spectators plenty to watch. Some heats were barely won with riders crashing out just before the line, picking up their boards only to bail over again before the line. Richard Dweza and Glen Phillips had been skating High Rising with a lot of speed all weekend, holding tight lines through carnage corner, both making it to the finals.

Pascal Weber the only international rider from Switzerland and Lloyd Clark from Joburg made up the rest of the finals. Richard Dweza has won the last 2 High Rising events and was going for his hat trick. Glen Phillips took the lead half way down the course but Richard was not going to let up and overtook Glen just before carnage corner, kept his line to take his 3 victory at High Rising!! Glen Phillips took 2nd, Lloyd Clark 3rd and Pascal Weber 4th.

SAGRA would like to thank all the riders, marshals, medics and Ford Noval shuttle for making this weekend such an amazing weekend of aweness, stoke and action! See you all at Houwteq Downhill Xtreme 16th - 17th April 2011!