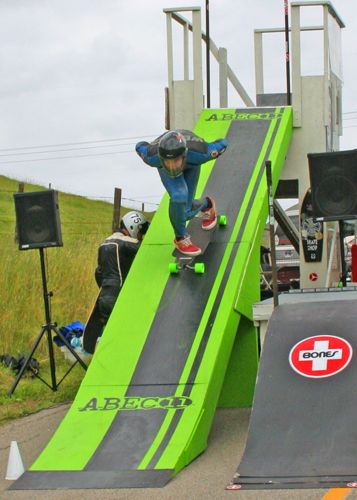 San Luis Obispo, California, USA - Kyle Wester from Colorado won todays Two Days of Turri IGSA Regional event in San Luis Obispo.  The weather forecast called for heavy rain all day but fortunately the rain did not materialize until the final round.

As the Consolation Final was underway it began to drizzle but both it and the Final were run to completion before the heavy rain hit.  Finishing in second place Nick Ronzani from Sacramento, CA.  Key Dougherty earned the final podium spot.  Race organizer Jonny Miller was fourth.  Matt Roberts was the winner of the Consolation Final earning him fifth place.

The Two Days of Turri was much more than just a Regional Downhill Race.  The event actually featured five different races plus an overall competition for the rider who had the highest average finishes spread over the five races.  Turri Road comes to a crest where the start lines were located and courses were set down both the steeper but straight South side and the flatter but much twistier North side.

On Saturday night there was a big party at promoter Jonny Miller's infamous Toyland Ranch.  Toyland is a huge 99 acre ranch just outside of San Luis Obspo on the Central Coast region of California.  Miller has built his own concrete skatepark overlooked by a stage where live bands perform.  Recently Naughty by Nature performed at Toyland for the MTV reality show "The Buried Life."  A great time was had by all.

The whole weekend was a lot of fun with a great mixture of the old school legends, current top competitors along with up and coming juniors from both the slalom and downhill world.

The first event of the weekend was the Time Trial Downhill.  Riders took off from Miller's massive "Thunderdome" start ramp and then rolled down the relatively straight south side of Turri Rd. All the riders took two runs with their single best time counting.  Top slalom racer Jason Mitchell earned the first victory of the weekend.  Race organizer and all around racer Jonny Miller was second.  Kyle Wester from Colorado finished third to represent the downhill scene.  Legendary racer Richy Carrasco was fourth with up coming Junior racer Nick Ranzani rounding out the top five.

Saturday's second event was the Super-G.  For those unfamiliar with this type of format, it is essentially a downhill course with widely spaced sweeping turns.  The race was run on the same course as the Downhill with approximately 15 gates (cones) added.  Everyone was suprised and really stoked to see the win go to legendary racer Jamie Hart.  Hart was a top downhill racer in the 70's so it was exciting for everyone to see him atop the podium.  Finishing in second was John Stryker from Washington followed by Jason Mitchell.  Chris Chaput finished in fourth with Mike Maysey rounding out the top five.

The weather forecast for Sunday was terrible.  A strong storm was forecast to hit the region around mid day so everyone did their best to move things along.  The next two events were held on the flatter but twisty North side.  A very strong tailwind was blowing the riders down the hill resulting in big speeds entering the "Hairpin of Death".  The Hairpin is a tight hairpin that is usually entered at apporximately 30 mph but the tail winds were increasing the approach speeds considerably.  Greg Fadell from Detroit was the most successful at taming the difficult course to earn the win.  He was followed by junior racer Keith Henderson in second, Jason Mitchell in thrid, Nick Ranzani in fourth and David Quezada in fifth.

Race promoter Jonny Miller decided he wanted to do something different and unique at the Two Days of Turri so he created the "Hairpin of Death" Speed Trap race.  The idea was simple with the rider who was able to carry the most speed through the corner and exit being declared the winner.  With the IGSA's speed trap set up at the exit of hairpin, each riders exit speed was recorded.  Many of the racers decided to watch this race as interested spectators because it was simply too gnarly for them.  There were a lot of crashes.  In the end Kyle Wester dominated with an exit speed of 29.96 mph.  Mike Maysey was second, David Quezada third, Key Dougherty fourth and Eric Tokle rounded out the top five.

At apporximately 1:00 pm in the afternoon, all of the timed events were finished and it was time for the IGSA Mass Downhill.  Not all of the riders who participated in the Time Trial Downhill chose to compete in the four man competition.  The brackets were set using the results from the Time Trial Downhill.  The crazy speed boosting tailwind from the North side of Turri was now a terrible speed killing headwind on the South side.  The clouds were getting really dark and ominous with everyone knowing rain was just around the corner.  The first two rounds went of in dry conditions but as mentioned earlier, it began to drizzle for the Consolation Final and Final.  The adverse conditions didn't seem to slow down Kyle Wester a bit.  He easily won all of his heats and the final to earn the win.

After all five races were finished each riders results were added up.  1 point was given for a win, 2 points for second 3 for third and so on.  The rider with the lowest points total was declared the Two Days of Turri Overall Champion.  After all the results were tabulated, Kyle Wester easliy won the overall title with a total of 18 points.  Finishing in second was Mike Maysey with 30 points and Jason Mitchell with 34 points. Rounding out the top five overall were Jonny Miller in fourth and Ricky Garland.

Special thanks go out to all the sponsors of the Two Days of Turri and especially Richy and Maria Carrasco from title sponsor Sk8 Kings Skateboards for all their efforts in making this event possible.
Teolo World Cup
Big Air Street Luge
2002 Big Air History