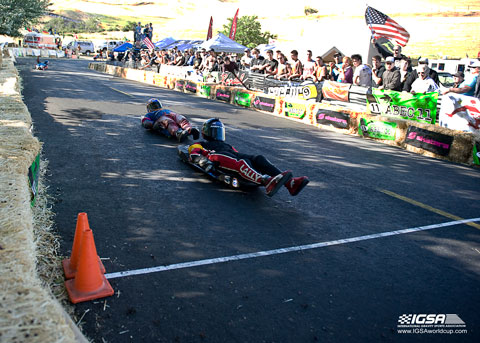 Goldendale, WA, USA- Andy Lally capped off a crazy coast to coast racing weekend with three race wins.  His week began at Maryhill with the practice sessions on Wednesday and Thursday morning.  After the Thursday AM session he quickly drove to Portland to catch a flight to Florida so he could race his #66 TRG Porsche GT3 at Daytona International Raceway in the Rolex Sports Car Series.

Andy had a great weekend at Daytona earning the GT class victory over his longtime rival Joey Hand in Saturday's Brumos Porsche 250.  After the race, Lally made another quick dash to the airport to get back to Portland.  He arrived back in Goldendale around midnight for some sleep before Sunday's Maryhill Festival of Speed finals. 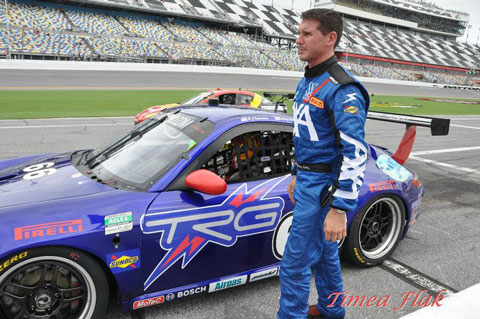 Since Lally had missed both qualification runs, he was forced to start from the back of the pack in both the Street Luge and Classic Luge races.  Conditions at the track were hot and very windy. The wind especially affected the Street Luges off the start where it was difficult to get a good push because of the headwind. The wind also sped up the pace significantly in the Skatera straightaway leading into the difficult Seismic Cowzer Corner. 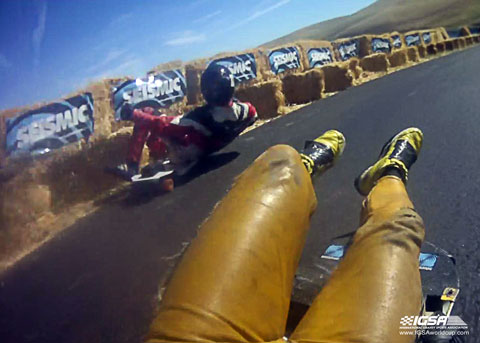 The Street Luge race began with the quarterfinals round.  The only upset in the round occured when third place qualifier Christian Conaway came through Seismic Cowzer Corner with a bit too much speed and clipped the hay bales on the exit allowing Chris McBride to come passed moving him into the Semi-finals.

The first Semi-Final heat included Matthias Lang, Chris Hicks, Kyle Castaneda, Will Condon, Ryan Everlsey and Simon Godfrey. Lang, Hicks and Castaneda used their superior pushes to get out in front.  The trio never looked back.  Behind them a great battle ensued between Condon and Everlsey for fourth place.

The second Semi-Final included Mike McIntyre, Kolby Parks, Will Stephenson, Chris McBride, Louis Roy and Andy Lally. The race started with Lally, Stephenson and McIntyre pushing their way into the top three positions with the others close behind. Mcintyre passed Stephenson going in the first never-ending corner. Parks then began to slowly close the gap with Stephenson for the third and final transfer spot. Parks went for a inside pass on the Gate turn and Stephenson shut the door. Video from Parks helmet camera showed that Parks foot actually went under Stephenson’s board and narrowly missed his back wheels. From that point Parks lost momentum and could not recover. 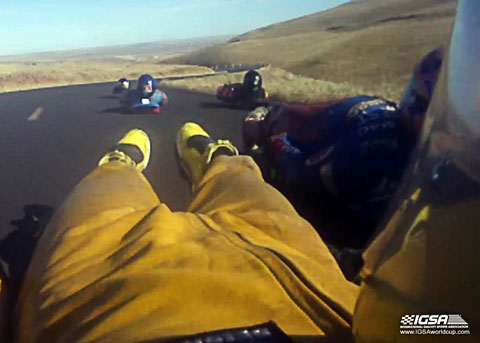 Lang out in front followed by Hicks, Lally, McIntyre and Stephenson.  Onboard photo by Will Stephenson

In the finals it would be two time Maryhill winner Matthias Lang, defending Maryhill winner Andy Lally, multiple time Maryhill podium finisher Mike Mcintyre and Chris Hicks, Kyle Castaneda and Will Stephenson who were looking for their first ever Maryhil podium. Off the start the order was Lang, Hicks, Lally, Mcintyre, Stephenson and Castaneda. As the battle for the top four got very close and into draft train Stephenson and Castaneda fell behind and wouldn’t be able to catch up.

Lally then passed Hicks for second coming into the first Never-ending corner.  Hicks was then passed by Mcintyre coming out of the Ambulance turn while the whole group inched closer and closer to Lang. Coming into the turn before Cowzer, Lang has a slight slide which allowed Lally to get a run on the inside coming into Cowzer. Lang then took a line which that was too tight for the speed he was carrying and slammed into the outside straw bales. Lally then cruised to the finish line with Mcintyre in second and Hicks coming though in third for is first podium in two years.

It was an incredible weekend for Lally earning three victories on two different coasts.  Everyone at Maryhill was really stoked to see Andy's commitment to gravity sports and amazed by his awesome performance.In each class he worked his through the brackets to earn a place in both finals.  From there nothing could stop him.