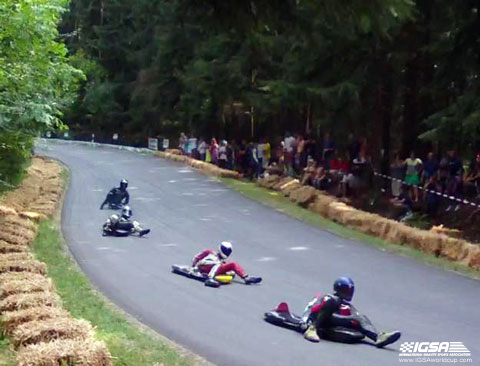 Hungerzell, Germany- For the first time in the history of the IGSA there is an Italian Street Luge World Champion.  Luca Santolamazza was victorious this past Saturday at the brand new course in Hungerzell, Germany.  The fast Italian rider overcame the hot and fast track conditions and two former world champions to claim the crown.  As the quarterfinals started the field of 32 was cut in half to 16 and the racing was getting very tight.

The first quarterfinal was between number one qualifier Peter Eliot and William Stephenson from Great Britain and Gerald Muller and Martin Witzigmann from Germany. Stephenson used his push to get himself out into the lead but was passed by Eliot within the first few corners. Coming into the hairpin into the final straight William slid out and scrubbed some speed off that allowed Muller to get by. Muller was able told hold off Stephenson down the finish along with Eliot to advance.

The second quarterfinal was between Cedric Robert from Switzerland, Martin Muller from Austria, and Joachim Lang and Eugen Forschner from Germany. All four had very good pushes and it was very tight between the four racers until the corner before the long high speed straight. Martin and Robert then took the corner better and pulled out of the draft of the two Germans and they could not catch up and Robert and Muller advanced. 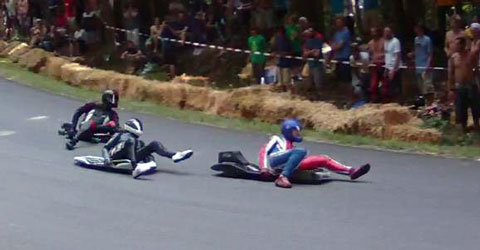 Eliot leads Semi Final #1.  Photo Kolby Parks
The third quarterfinal was between Yvon Labarthe from Switzerland, Alex Frischauf from Austria, Chris McBride from the USA and Rene Marx from Germany. The pushes of Yvon and Alex got them out in front and that where they stayed while McBride and Marx fought for third all the way down the course and lost the vital draft of the front two runners.

The fourth and final quarterfinal was between Luca Santolamazza from Italy, Abdil Mahdzan from Malaysia, Edgar DeWit from Holland and William Condon from Canada. Santolamazza pushed his way out in front with Mahdzan in second and DeWit and Condon battling for third. Down the straight Santolamazza and Mahdzan were battling hard and that allowed DeWit and Condon to catch up. Off of Riche corner Condon got the best run coming onto the straight and was able to pass both Mahdzan and Dewit down the final straight and advanced in a photo finish. 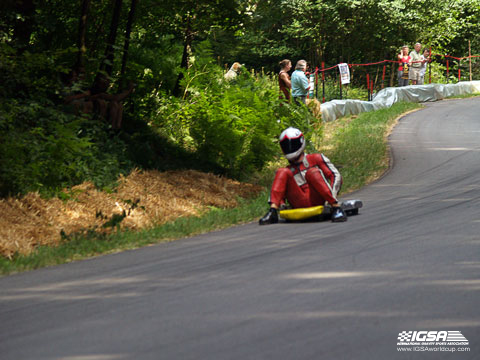 Luca Santolamazza way out front in the Street Luge Final.  Photo Pierre Gamby
The Finals to determine the Street Luge World Champion were now set and included two former world champions Eliot and Labarthe, and up and coming racers Santolamazza and Robert, Labarthe pushed his way into the lead followed by Eliot, Robert and Santolamazza. Coming through the first set of sweepers Eliot bumped the back of Labarthes luge and he went into the grass while Eliot struggled to maintain control of his luge. Robert had to take evasive action to avoid them both, Luca Santolamazza then passed them all in the confusion. Eliot and Robert then needed to play catch-up through the rest of the course but they could not catch the fast Italian rider. 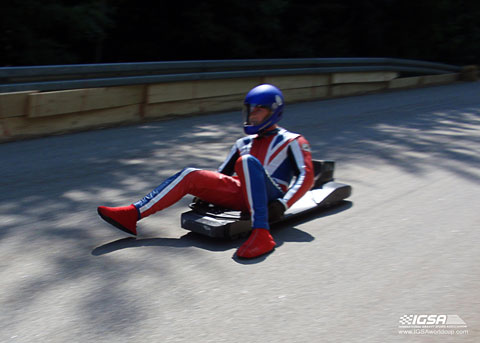 After the first run of qualifying of the day it was clear that this years Street Luge field is very strong with eight riders qualifying within less than two seconds of each other.

The fast Italian rider, Santolamazza looked good to get the top position through qualifications heading into the second round. Yvon was visibly surprised when he heard his time was only good enough for second, an unfamiliar position for the reigning World Cup Series Champion. Eliot also said after the first run that he didn’t know if he could beat Luca’s time.

The second round of qualifications started directly after the first. The riders showed that the very short break was a great benefit to their concentration and preparedness level. Nearly every rider posted a faster second run time. Chris McBride USA) hit a new top speed with a 112 KPH recorded on his GPS but that was only good enough for eleventh.

Even though everybody improved, nobody could get past the top three. Peter Eliot then threw down the challenge for Yvon and Luca with a new track record of 2:43.781, nearly two and a half seconds faster than his previous run.

Yvon was next to come down and as he slowed in the shutdown area he looked optimistic that he improved his time, which he did by two tenths for a 2:45:269. Good enough to moved past Luca’s first run time and into second place.

Santolamazza was the last to come down and the only rider that could threaten Eliot. He came through with a 2:45:101, improving his time by two tenths moving past Labarthe again for second, but not enough for the top spot.  Tomorrow’s race looks to be the most competitive competition for the Street Luge in recent memory with half the field separated by only a few seconds and with eight of the top ten ranked Street Lugers in the 2009 points standings racing as well.
Almabtrieb World Championships