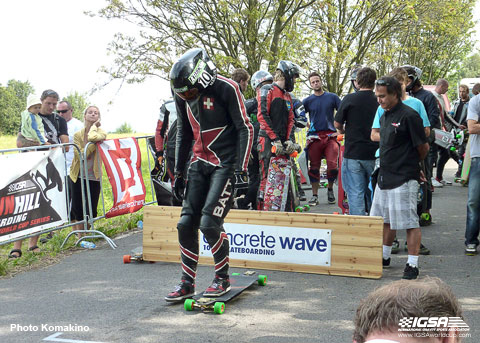 Christoph Batt prepares for his record breaking run.
Kozakov, Czech Republic- Christoph Batt lowered the track record he set last year by more than two seconds to earn the number one starting position for the Kozakov Challenge World Cup race being held in the Czech Republic.  Last year Batt earned the fastest qualifying position when the event was the IGSA European Championship with a time of 2:26.602.

On the second run, Reimer couldn't improve on his time.  Batt on the other hand ran a time of 2:24.365 on his second run to beat Reimer and set a new track record in the process.  Jackson Shapiera improved on his first run time by nearly three seconds.  He posted a time of 2:25.023 to move into the number three position.  Patrick Switzer also made a big move forward with a 2:25.232 to seed himself in the number four spot.  Andrew Chapman put in a strong performance with a 2:25.551 placing himself in fifth.

The weather forecast is calling for heavy rain on both Friday and Saturday.  Everyone is hoping there will be a window of opportunity over the next two days when the race can be run.  If not the final results will be determined from today's qualifying runs.  We'll keep you up to date with all the latest information.