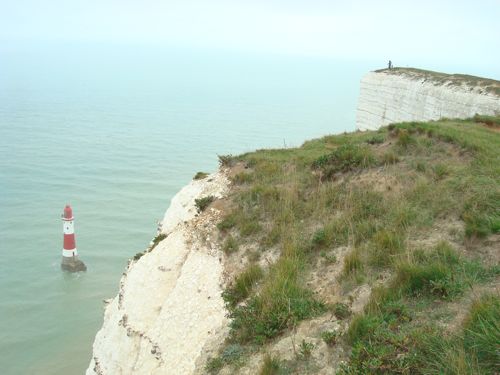 Unfortunately the IGSA World Cup won't be visiting the cliffs of Eastbourne in 2010.  Photo Marcus Rietema
Petaluma, California - The IGSA is sorry to announce that Eastbourne Speed Days scheduled for August 20-22, 2010 has been canceled.  Due to budget shortfalls from the Eastbourough Council organizers and their failure to secure a new title sponsor, the event will not be going forward.  GoFast! energy drink departed their title sponsorship role only weeks before the 2009 event but the Council picked up the tab to go forward with the race last year.
Norman Kinnish, who worked for the Eastbourough Council and was instrumental in the success of Speed Days the past three years was let go shortly after last years race.  Despite assurances from the Eastbourough Council to the IGSA that the race would continue in 2010, they have now decided to cancel the event.   Fortunately, Kinnish has started the STOKED.UK Series so British racers will still have a number of great events in 2010.

The IGSA is still looking forward to three really strong World Cup races in France, Italy and the Czech Republic along with the World Championships in Germany.  Last weeks announcement of the European Championships returning to Insul further strengthens what is still the strongest lineup of European events in the IGSA's history.  We are sorry for any inconveniece that this has caused to the fans and competitors of the IGSA World Cup Series.
Teolo World Cup
Big Air Street Luge
2002 Big Air History