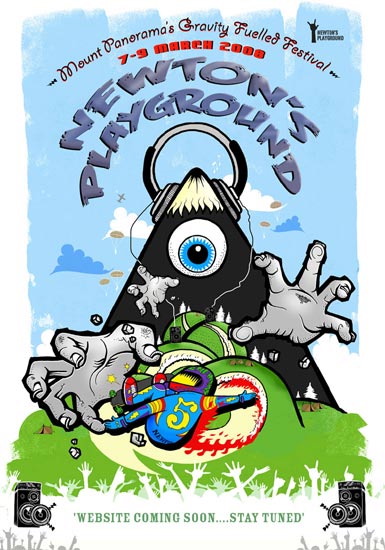 With the countdown officially on to Newtons's Playground - the first Mount Panorama Gravity Fuelled Festival, organisers are finalising their plans for the circuit setup, in particular, how to soften the impact that some riders will inevitably experience when they come unstuck on some of the Mountain's most treacherous corners.

Over 2,000 hay bales have officially been ordered from local suppliers in the Bathurst region, the majority of which will be focused on the hazardous corners known as Forrest's Elbow, The Esses & the Dipper.

"Although we will have hay bales lining most of the one & a half kilometers of the Mount Panorama circuit used for the event, it's mainly the Forrest's Elbow corner that most of the riders will be concerned about,&#160 said Australian Skateboard Racing Association (ASRA) spokesperson Steve Daddow.

"The Esses & the Dipper should be OK given they're close to the start of the run, but when the riders hit Forrest's Elbow they'll be coming off a sweet straight run from the Dipper travelling at anything up to 90km/h and it will take every bit of concentration from riders to navigate that corner without crashing."

"We are just hoping that it's not a case of Steven Bradbury all over again when it comes to finals time",&#160 said Mr Daddow, referring to the "last man standing" gold medal winning Australian Ice Skater, Steven Bradbury. Bradbury won gold at the 2002 Salt Lake City Winter Olympics, when all other competitors in the Ice Speed Skating event crashed out on the last corner before the finish line.

While winning is one thing, safety is paramount at Newton's Playground and it's more a case of preparing for when the crashes will happen, not if, according to Event Director Simon Rollin.

"Given the nature of these sports and the section of Mount Panorama being used, we believe there will undoubtedly be some spectacular crashes, so really the challenge for us is to minimise the fall out."

With speeds of up to 130km/hr expected on board the Street Luge & Gravity Bikes, rivalry is expected to be fierce with a large contingent of Australian gravity sport competitors keen to prove themselves on the international stage. Newton's Playground is the first International Gravity Sports Association (IGSA) World Cup event to be staged in Australia. The top feature events will be the Skillset World Cup Street Luge and the Excelarate World Cup Speedboard. Other on-track events include World Cup Gravity Bike, Buttboarding, Giant Slalom, Hybrid Slalom, Freestyle Skateboard Sliding & Downhill In-line.

Tickets are now on-sale for Newton's Playground exclusively through Moshtix. Interested spectators can purchase online (www.moshtix.com.au), by phone (1300 GET TIX (438 849)) or through any Moshtix outlet including Bathurst outlets Stop n Rock, Cobb and Co Cellars or Lithgow outlet Insane Cycles.

All event & ticketing information can be found online at: www.newtonsplayground.com.au

Spectators are encouraged to book early as there is a strictly limited capacity.