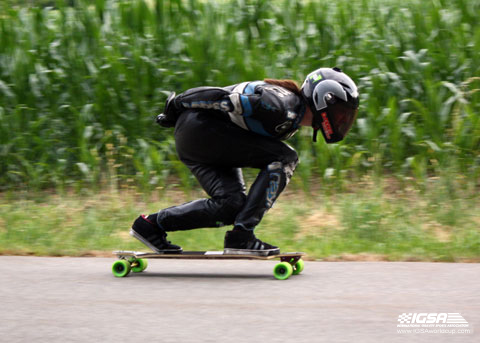 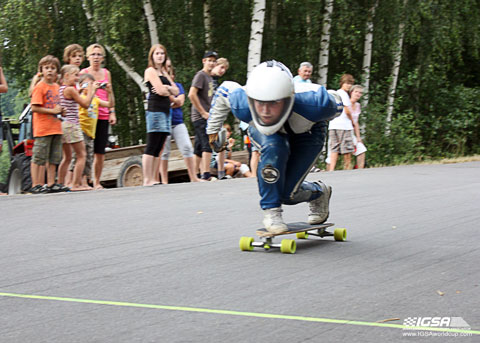 Davies received some stiff competition from Sweden’s Kristina Engstrand in Thursday’s first qualifying session.  Davies time of 3:03.449 was only 1/100th of a second quicker than Engstrand’s 3:03.459.  Engstrand has really improved her skating over the off-season and seemed be a legitimate threat to Davies.

The much anticipated showdown between Davies and Engstrand in the second qualifying run never materialized.  Engstrand crashed on her second run while Davies rose to the challenge and delivered a crushing performance of 2:59.501 cutting nearly four seconds off of her previous days time!  Davies went into race as the heavy favorite to win her third Women’s Downhill Skateboarding World Championship in a row.

In Saturday’s World Championship Final, there was simply no stopping Davies.  She lined up against 2006 & 2007 World Champion Vogler, 2009 IGSA World Cup Series Champion Kornienko and number two qualifier Engstrand.  Right from the start Davies simply pulled away and left the other three skaters racing for second place.  Kornienko finished in second and Vogler third.  Number three qualifier Dominique Vukorep was forced to miss the race when she became ill with a stomach virus on Saturday.  Brianne dedicated her World Championship victory to her friend Glenna Evans who was killed in a longboarding accident a week ago.

The ladies will be back in action next week in France for the third round of the 2010 IGSA World Cup Series. 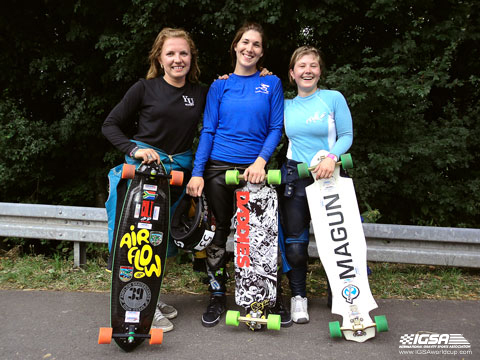