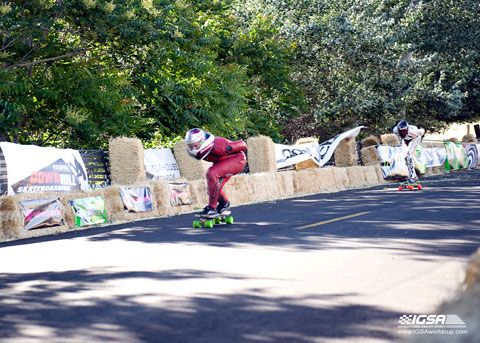 Goldendale, WA,USA- Zak Maytum stormed to victory in today's Maryhill Festival of Speed Downhill Skateboarding race.  Number one qualfier Kevin Reimer looked set to make a run on Maytum as they entered Seismic Cowzer Corner but as Reimer set up for the corner he briefly dropped a rear wheel off the pavement and went fishtailing down the track.

Amazingly Reimer was able to gather it back together without crashing but he lost his momentum.  From that point all he could do was follow Maytum to the finish line.

More drama took place behind Reimer as Patrick Switzer and Scoot Smith were battling for third place behind him.  As the two skaters were setting up for Seismic Cowzer, there was contact that sent Switzer off his normal line.  He ended up crashing heavily into the bales but fortunately was not injured.  Scoot went on to finish third earning the final podium spot.