Teolo, Italy- Patrick Switzer earned a hard fought victory in todays Padova Grand Prix .  He was victorious over Christoph Batt, Douglas Silva and number one qualifier Ramon Konigshausen in the final.  The win is Switzer's first victory of the year after strong finishes in the United States (sixth), Germany (third) and France (second).

The finalists lined up with the number one qualifier Konigshausen, the number two qualifier Switzer, the number three qualifier Silva and the number ten qualifier Batt who seemed to get quicker with each run.  Off the line Silva used his awesome push to take the lead with Switzer second, Batt third and Konigshausen fourth.  Konigshausen later said he wasn't concerned to be in fourth at the beginning since there were three places on the course where he would set up for passes.

The first came at the end of the long straight where it first veers left and then goes hard to the right.  Switzer set up Silva as they headed into the combination nd passed him on the exit to take the lead.  Konigshausen planned to make his first move past Batt at this point as well but carried way too much speed and crashed hard into the straw bales at the exit of the right hander.  Heartbreakingly, the number one qualifiers race was lost. 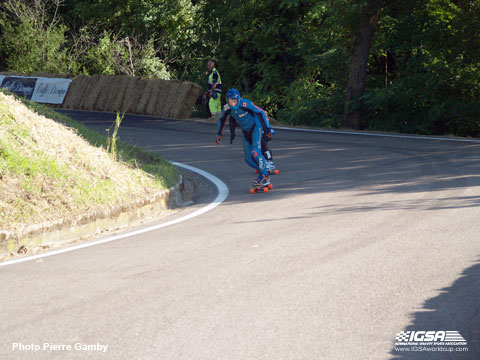 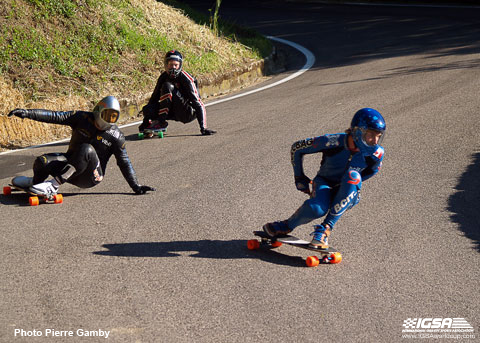 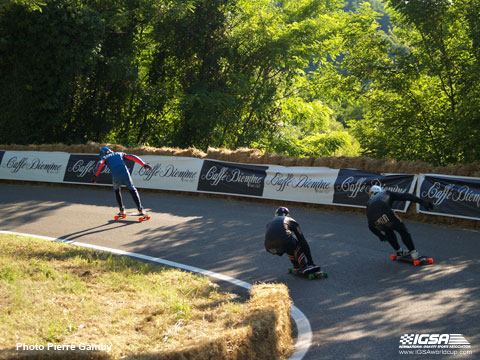 Switzer had a small lead heading into the second left hander.  Silva was close behind with Batt lurking behind Silva.  As Silva went through the corner he lost traction and slid out losing his speed and allowing Batt to pass him on the inside.  At that point, the race was over.  Switzer now had a commanding lead and pulled away as they headed toward the finish.  Batt settled into second, Silva third and Konigshausen brought up the rear in fourth.  Switzer was elated with the victory and in Kevin Reimer's abscence, took over the lead of the World Cup Series points standings.  The World Cup Series now will take a week off before returning in two weeks for the Kozakov Challenge in the Czech Republic.  Most of the world's best downhill skateboarders will return to action this coming weekend at the European Championships in Insul, Germany.