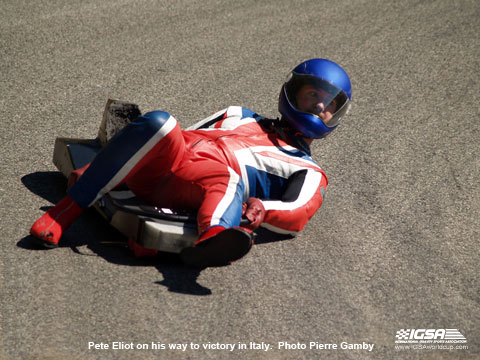 Teolo, Italy- Pete Eliot earned his first IGSA World Cup victory of the year yesterday in a hotly contested final at the Padova Grand Prix.  There was a a controversial crash at the start that took both number one qualifier Labarthe and Santolamazza out of contention right off the line. 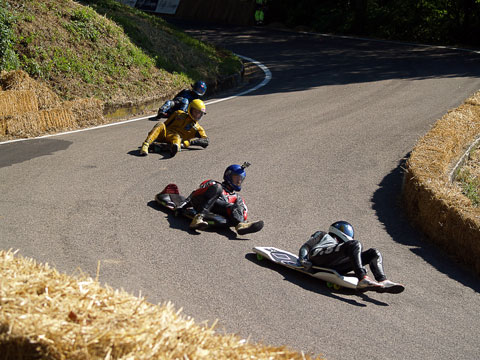 Eliot lined up against number one qualifier Yvon Labarthe, newly crowned World Champion Luca Santolamazza and Swiss ace Cedric Robert in the Final.  Labarthe was on the left side of the track, Eliot next to him on the right, Santolamazza on Eliot's right and Robert on the outside right.  As they left the line Labarthe pulled away from the line first and started veering slightly to his right in front of Eliot.  Santolamazza also pushed away hard and was veering hard to his left, also in front of Eliot.  Eliot had nowhere to go and was essentially sandwiched between the two riders.  Eliot's feet made contact with Labarthe's tail and sent him spinning out of control and collecting Santolamazza in the process. 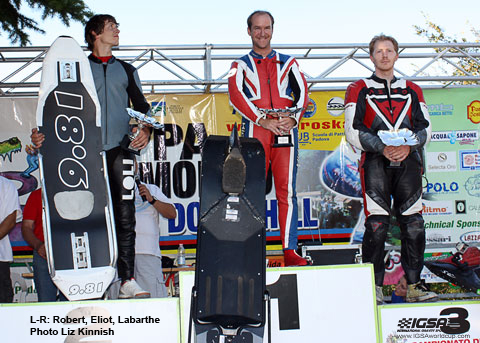 Miraculously Eliot came out of the incident unscathed with Robert hot on his tail.  The two riders went down the entire course nose to tail with Eliot coming out on top.  Labarthe restarted and finished third.  He filed a protest at the finish not knowing fully what had happened at the start.  The IGSA official at the start used both eyewitness accounts and video to review the incident and determine that Santolamazza was responsible for the incident.  Since Labarthe had finished third and Santolamazza fourth, there was no penalty that could be applied that would move Labarthe's final placement up.  The results stood and Eliot celebrated his first World Cup victory of the year.


Serek Wins His Third in a Row 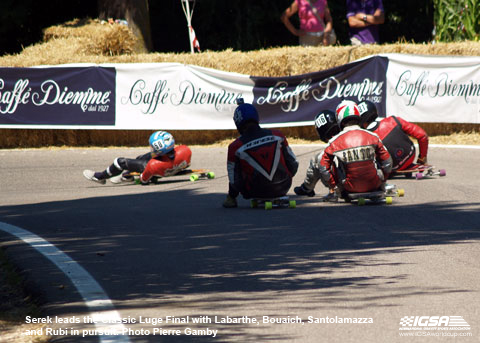 Teolo, Italy- Michael Serek continued his total domination of the Classic Luge catagory by winning the Padova Grand Prix yesterday.  He was never seriously challenged all day and beat Yvon Labarthe and kevin Bouaich to the line.  The win was Serek's third World Cup win in a row.  It now seems that American Andy Lally is the only person on the planet who can beat Serek.  Lally is currently busy wih his auto racing commitments and therefore unable to compete.  Hopefully the two will meet at a World Cup race later in the year. 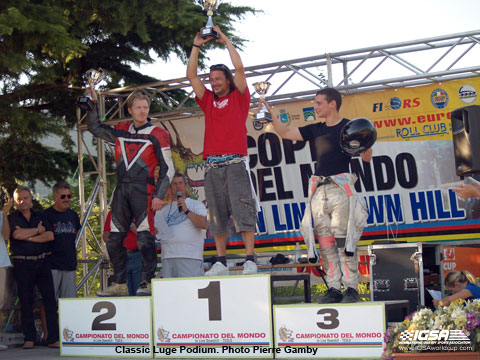