Published: Friday, 20 April 2012 14:12
Pilloni Storms Into the Lead After 1st Round Qualifying 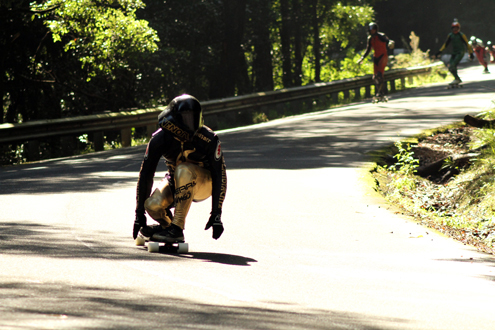 Patrick took an early lead and looked unassailable until American Pilloni jumped on his board and attacked the pavement.  Third place is Local Hero, Ben Hay, virtually unknown outside of his native Australia , he is very familiar with the course and looks to be a major threat to the visitors. He stands a clear chance of beating all the other Australian especially since Australia ’s top ranked World Cup Competitor Jackson Shapeira is sidelined with an injury.

Mount Keira Challenge is being held in the very picturesque surroundings of New South Wales ’s Tropical Rainforest, close to the coast facing the Indian Ocean . This brings interesting weather, yesterday it rained non stop, leaving a wet but drying track for the warm up runs this morning. Riders who sat out the warm ups could not expect to have a fast time. Notably Mischo Erban, sits in 45th place, largely due to this issue.

Roughly 50% of the field fell in the wet turns in the qualifying run, making the times look odd to the trained eye. Leading the group who fell, James Kelly is lying in 11th place despite taking a tumble. If he keeps it together tomorrow, he can be expected to post a storming time.

Organisation of this event has impressed the IGSA Official present. The team already host a World Cup event, the ever popular Newton ’s Nation, which takes place next weekend. They have built a very strong organisational team and have put together a high quality event at Mount Keira .

IGSA rules have changed over the winter and as Mount Keira is the first World Cup event of the year, this will be the first time they are tested in the heat of combat. In particular rules governing protests have been overhauled to cut tactical protesting. The wearing of body ballast, has been banned following controversy in Brazil at Teutonia.

In Street Luge, British star Will Stephenson set a a quick time early in the session. Riding a totally new carbon fibre luge he had looked impressive in practice, but was one of the fallers in the Open Downhill qualifying. This contact with the straw bales must have wound him up and he lead the field until Brendan Burke managed to squeeze ahead with a time 0.8sec faster. Abdil Mahdzan from Malaysia is lying in fifth place marginally behind Nic McKirdy and Adam Sparks. 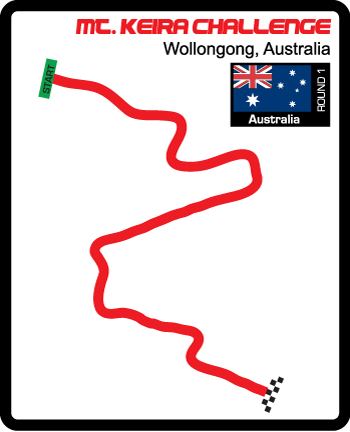