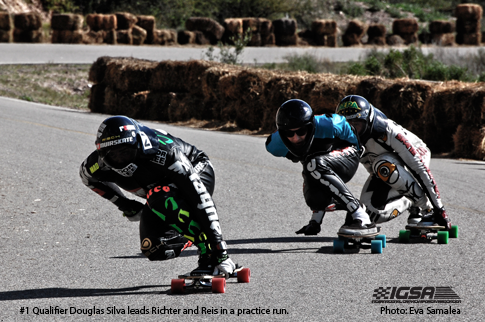 San Luis, Argentina - After a full day of practice under a hot sun yesterday, qualifying started today at the Snake Skeleton World Cup in Argentina with very windy and cold weather. A strong headwind was blowing all day making the hill much slower than on Friday. Two qualifying runs were given to each of the 229 riders registered.

Defending Champion Brazilian Douglas Silva set the fastest time of the day with a 2:21.180 to qualify number one for the Open Downhill race. He was followed by fellow Brazilian Thiago Lessa with a 2:21.790 in second and American Alex Tongue in third with a 2:22.590. Brazilian Danky Ovalhe, who won the South America IGSA Continental Race in Chile last year, sits in fourth position with a 2:23.090. 2012 IGSA World Champion American James Kelly rounds out the top five with a 2:24.680.

In the Women´s Downhill, 2012 World Champion Rebecca Gemperle from Switzerland put in a very solid run to set the best time and earn the number one qualifying position. 15 year old Georgia Bontorin from Brazil was second. Manuela Bayugar from Argentina was third, Brazilian Christie Aleixo was fourth and appears that she will challenge Rebecca and Georgia in the race.

Last weekends’ Street Luge winner in Bogota, Colombia Leo Borton appears to be have the field covered when he set the fastest time of the day. The Brazilian, who is also the defending Snake Skeleton Champion, posted a time that was more than two seconds faster than 2011 World Champion Walter Ribeiro who was second. Rodrigo Bisquertt from Chile qualified in third position with Mario Jardim in fourth. 2011 IGSA World Cup Series Champion Yvon Labarhe from Switzerland, rounded out the top five.

Canadian Quinn Finocchio was the fastest in Junior II with Defending Snake Skeleton Champion Daniel Padua in second. William Rubin was third. In Junior I, Brazilian Lucas Rocha seems to be unbeatable when he set a time that was 12 seconds faster than second placed Nestor Castro from Argentina. Leonardi Veradi was third. In Classic Luge, Walter Ribeiro earned the pole position with Yvon Labarthe in second. Ignacio Palacios from Argentina was third

Tomorrow's race will utilize six man heats that should ensure plenty of action for the huge crowd that is expected.