Seven Championships Will Be Decided

San Dimas, CA, USA - The 2012 IGSA NorAm Series comes to a conculsion this weekend with the NorAm Finals taking place at Frank G. Bonelli Park in San Dimas, California.  Racers from all over North America will be descending on the park with its\' infamous right hand corner that has taken out many racers through the years. 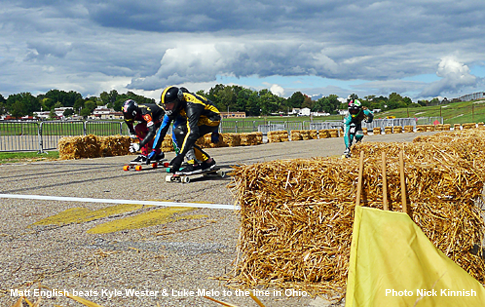 Akron, Ohio, USA - Round #7 of the 8 race IGSA NorAm Downhill Series took place today in Akron, Ohio also known as Rubber City because all of the major U.S. tire manufacturers (Goodyear, Firestone, Goodrich, General) once were based here.  Akron is also home to the All-American Soap Box Derby which is the reason that the race took place.  Utilizing an all new course that featured both city streets and a newly paved access road, this weekends race was very popular with both racers and spectators alike.

The International Gravity Sports Association, the world sanctioning body for extreme gravity sports racing, will be sanctioning a “NorAm” stop in their series for this year with the Akron Rubber City Gravity Games!