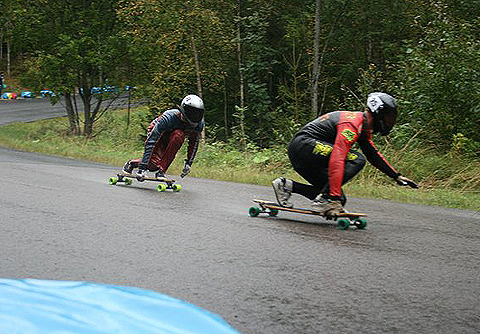 Photo Christian Romenstad Klaveness
Oslo, Norway- Even though the Norwegion Championships was designated as an IGSA National event, it was quite an international race with riders from Germany, France, Ireland, Poland and Sweden in attendance.  Some well known racers like Boris "Jambon" Schinke, Lutz Wagenhauser (organizer of the Euro Champs) Christoffer Sanne and 2006 IGSA World Cup Series Champion Fredrik Lindstrom came out to mix it up in Oslo.
Friday the 10th of September was a clear, cold and dry day.  75 eager riders met up on the top of Grefsenkollen. The hill is a short drive from the centre of Oslo. The access road to the  restaurant at the top was repaved in the Autumn of 09' and became an instant hit with downhill skateboarders. It was then the Norwegaian Downhill Skateboard Association decided to hold the first official Norwegian Championships. The road is a wide, smooth flowing run of 1.6 km (1 mi) with a top seed of just under 80 km/h in qualifying. 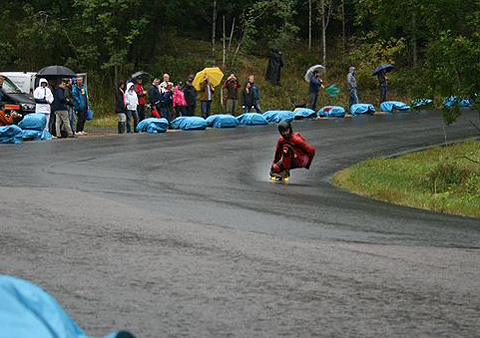 Hakon Wegge in the wet.  Photo Christian Romenstad Klaveness
Free practice was an instant success as riders found more and more speed on the closed track.  Unfortunately, the contests youngest rider, Gorgus Coward (age 13) collided with Gundmundur from Island rider and both went down hard. Gorgus sufferd a broken collarbone, a tweaked ankle and bruisd ribs. Gundmundur was out with concussion. Despite his injuries, Gorgus turned up the next day the cheer on the riders.
As time was limited, only one timed run was done. Fredrik Lindstrom was fastest by nearly a second followd by Boris Schinke in second. 3rd spot and the first Norwegian was Adrian Jancey. Current Junior II World Champ, Audun Guneriussen made the top 10 in 7th place. 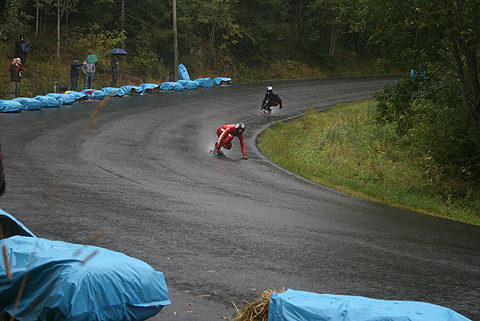 Alex Lyngaas.  Photo Christian Romenstad Klaveness
Saturday the 11th was race day. Everyone got up early for a cold and wet day on the hill. The race was going to be held regardless of the weather as the road is wide and has fairly good grip in the wet.  Of the 73 riders from the qualification, 60 went directly into the 64 man bracket. the remaining riders were put in a "Repacharge race" for the remaining 4 spots.  Some riders did not start due to the wet and slippery asphalt. Fredrick Lindstrøm was among them.  The crowd numbers raised from around 10 the first day to around 200 on race day

In the heats the usual suspects advanced. Lutz Wagenhauser was showing that he is a great racer as well as a great race organizer and made it all the way to the Consolation Final which he went on to win. 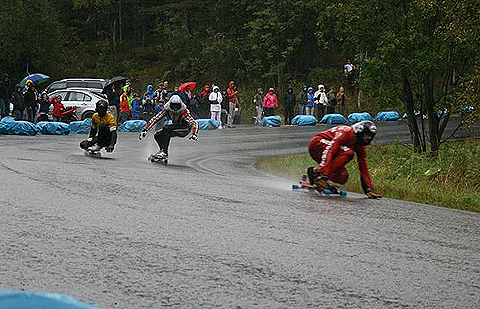 Boris Schinke had to fight Alexander Lyngaas until the semifinals.   Photo Christian Romenstad Klaveness
Schinke worked his way steadily through the heats to take the win! He was followed by Trygve Jørundland in 2nd, Jarle Aasheim in 3rd and Johan Simonsen in 4th.  Boris won the race using double inline skate (rollerblade) wheels on the front truck! 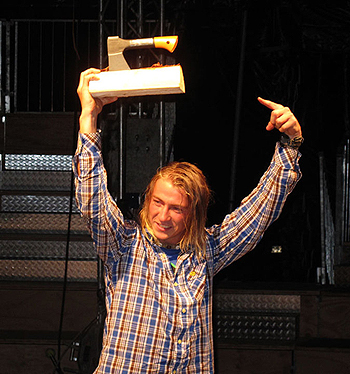 Tryge Jorundland was crowned Norwegian Champion.  Photo by Jorgen Egeland
Junior World Champ Audun Guneriussen made it only to the second heat. before he was eliminated.   Håkon Wegge who was the runner up in this years Junior World Championship, made it to the semifinals and ended up at 8th place.  Boris Schinke had to fight Alexander Lyngaas until the semifinals.

Prize giving and after party was held in a Circus tent just as short distance from the hill.

During the party, the film Skate Australia by Anthony Fricker was shown.

Here is a sweet video:
Norge i verdenstoppen i downhill skateboarding
Fra 5 til 100 aktive utøvere siden 2005